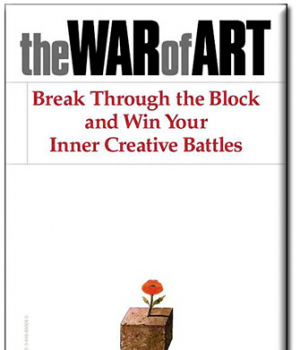 I’ve been procrastinating on a few scripts and projects for a few… um, decades. But I make it a policy to never complain about that to anyone EVER. Except friends and family and people ahead of me in line at Fat Sal’s and customer service reps. So when a friend recently suggested I read a book about “breaking through blocks and winning your inner creative battles” called The War of Art, I countered that I didn’t have writer’s block, I just didn’t know what to write, which sounded self-aware until I typed it into our IM, where it immediately became retarded. So since I have Amazon One-Click the book arrived in 48 hours. Page 1:

Most of us have two lives. The life we live, and the unlived life within us. Between the two stands Resistance.

I was instantly exhausted and confronted. This seemed like a good place to stop and contemplate my general disdain of books, and reading in general. And following the advice of friends.

Thankfully I had thought to bring two popsicles to this reading session with me, so I put the book down, and spent several minutes carefully unwrapping the popsicle, wrapping the paper back around the stick, sucking on the top, and positioning the popsicle in a way that would provide easy access to both eating it with one hand, and turning the page with the other. It was like a popsicle tea ceremony. I continued.

I sighed loudly and closed my eyes. This mattress pad is amazing. How does Costco have such low prices? I wonder if they have samples during the week, or is it only on weekends?

I continued to read the book for what must have been at least 90 seconds, and began physically writhing and twisting on the bed. Each word burned my skin like holy water on Linda Blair, and I fidgeted until I could bear it no more. I took the book to the bathroom.

When you don’t have a real job, you begin creating tasks to complete during your day, which give you a feeling of satisfaction and accomplishment. A year ago I had tasks like:

I’m close to adding “digest food” and “divide my cells.” But in the bathroom I realized that I forgot to add “read War of Art” to my list… So with nothing to cross off when it was done, this whole attempt could be considered wasted time.

Before further filling up my mental note pad, I thought I’d check how many pages I’d read so far, to try and psyche myself into going on, like one of the contestants on the Biggest Loser hoping they had lost at least 10 pounds. But there were no page numbers! This was madness. Why would they write a book and not include page numbers? I flipped through the book and there seemed to be numbered pages towards the back… Finally I realized that the pages of the book were numbered, except for the Intro, which was four pages long and I was still stranded on page two. I’d been wrestling with this book for a half hour and apparently had only turned the page once.

After such an intense realization, I took a deep breath and decided to just stop everything and do what needed to be done: